It's 6 pm on Saturday night, and we've just hit the northern outskirts of Brisbane - that long drag through Carseldine into town - and I'm starting to get my usual reaction to Brisbane; the hair on the back of my neck is up, sweating palms, prickling scalp, and the unmistakable metallic taste of anger rising at the back of my palate.

hughesy
Australia
Welcome to my world. I've only been in it for a few years, but now I can't imagine living anywhere else. I moved from the big smoke to the country a few years back and it gave me the time to write a whole book, Art Life Chooks, about the experience, which was published in 2008. As the blurb on the back says: "To me, Hughesy is the absolutely fabulous super agent I drank with in the swishest bars in the greatest city in the whole wide world. But that is not Hughesy a you know her. You know her better than I because you know her now as the chicken lady of the northern coast." JOHN BIRMINGHAM Author 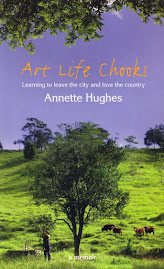